In early 2007, Greenville Ohio, Lätter was formed and has since been noted as being one of the area’s premier bands by fans and clubs alike, with former members of Against Time, Tazmania, Masque, 2X2 and Ithika, to name a few. The project was put together to form a band that had not only veteran musicians with over 100 plus years experience between the 4 members, but with a quality of music that has been missing in today’s music industry as far as “local” talent. Lätter is a 4 piece powerhouse, with an amazing musical blend of 70s and 80s Rock/Classic Rock, some great “hair band” tunes, and most importantly…a high impact show!!!

In 2013, Lätter had the honor to open for national acts Jackyl and Drowning Pool at Ohio Bike Week in Sandusky Ohio, and Pop Evil in 2014. This was a great milestone for the band and as we strive to move forward with our own original music, the covers are a great impersonation of what Lätter is all about, as well as a great time with friends who love music!

2015 started off HOT and indeed, not stopping there! Lätter promises the best years yet to come with big shows and summers to remember!

2016 was an unreal time full of great shows, and 2017 saw Lätter taking things to a new level. Even bigger show, bigger lights and a bigger, tighter, fuller

2018 was highlighted with an unforgettable performance sharing the stage with The Iron Maidens and none other than Queensrÿche! The Rÿche was (and remains) a major influence on us all, and it was quite an awesome experience to meet such a warm and engaging bunch of true gentlemen.

As we move into 2019, we look forward to more everything! More fun, more great times with the greatest fans, and more BIG shows!

2021 – Finally back! Things are just, well…kickin’ major ass. The shows are awesome, the crowds are way bigger then we ever thought they may be (not really) we figured this band would soar high. With a positive outlook and undeniable skills, Lätter is YOUR band. We play for you all. Without you guys, its just 4 dudes playing with ourselves.

2022 – The sky is the limit with this band. Just wait till you see what we have in store.

With all that said, let’s take a closer look at the bands members…

Quintin Fyffe, founding father of Lätter, a man of many guitars, amps, great ideas and swag. Plays well with others, except assholes. They can go pound sand!

Afraids: Zebras and the color Burlywood

Likes: Jack Daniels and any Bad Beer from the 70’s

Tim Hart solid bass and the foundation of the thunder. Tim brings to the stage a ton of experience along with many years of musical ability.

Likes: Cold adult beverages. Other then that, he’s a very cool dude.

Jim Graham likes to sing, and boy, we sure like it when he does. He also likes long walks on the beach, boasts an impressive (yet mildly disturbing) collection of Precious Moments figurines and memorabilia. Digs the poolside chats.

Rob has came in as a hired gun, but lately he has not left! We just wonder what the hell he is thinking? Could be things like: Puppets, Midgets, How Monopoly pieces are made? Is flour really dangerous? We have no clue. He just hits the drums…and twirls sticks, stands up and plays, drops sticks sometimes…..but most important, he dont miss a beat 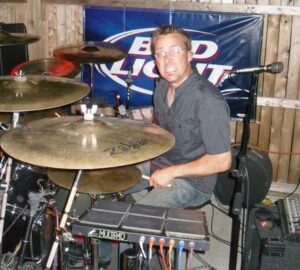 Afraids: to be lost and naked

Likes: to be found naked but not afraid….. and an occasional cluster of grapes laying around.

All the Lads have agreed that Malört is the devils piss in a bottle.